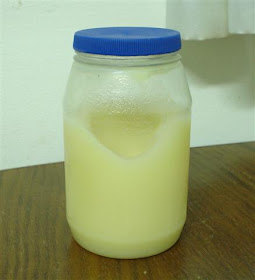 I know, I know, some of  you will cringe at the thought that I actually serve my family food specifically cooked with rendered chicken fat, but as blasphemous as it sounds, as the daughter of a cardiologist I'm still a fan of the Weston Price Foundation's traditional foods diet.
I believe that the less processed a food is, and the longer our ancestors have been eating it, the healthier it is. (And yes, there has been scientific research backing up that claim.) Chicken fat and other animal fats have been around much longer than other, more frequently used oils; I feel 1000 times better serving my family something cooked with chicken fat than made with canola or soy oil.

Rendering chicken fat is a fairly simple and easy process. I love using rendered chicken fat because of a- the health reasons, b- the price (free or very cheap!) and c- the taste! I love that food cooked with chicken fat is so saturated with flavors that no artificial flavorings and chemicals need to be added to the food.
(You can also render fat from any animals. Beef, lamb, and pork are but some of the other options, but I've only rendered chicken fat.)

To make rendered chicken fat, you must do a few simple steps.

1. Obtaining the chicken fat.
For me, this is the easiest part. When I go to the grocer, I hang out while I watch him helping other customers. When I see the grocer preparing chickens for someone by cutting off the fat, skin and scraps and he's about to toss it into the garbage, I ask him to put aside that and save it for me. Usually by doing this, I am able to get quite a large amount of chicken scraps easily.
Even if he's already tossed it into the trash, I will occasionally ask him to take it out; all that goes into the garbage there are chicken bits and the wrappers from other chickens. I just wash it very thoroughly when I get home if this is the case.

To be honest, I'm a little embarrassed about asking for the chicken scraps, so I've been known to fudge a little and say that it's for my cats. Maybe one day I'll gain the courage to say that it's for myself.
If your butcher doesn't want to give you the fat for free, even if he charges you for it, it'll probably be such a small amount that it's worthwhile even to buy it. If your butcher is part of a large grocery store and they're unsure if they're allowed to give you the scraps, it may help to request from the manager of the store yourself; doing that afforded me an easy "Sure, no problem".

2. Wash The Fat
Who knows what those chicken scraps have touched. Especially if you sometimes use scraps that were in the rubbish bin, you'll want to run those chicken parts under a ton of water, making sure no bits of dirt or paper or wrapping remain.

3. Sort and Cut
Usually chicken scraps will be comprised of a few different parts- plain fat, skin, and unwanted bony parts. when rendering the chicken scraps, you don't really want the bones. Put the plain fat and skin into one pile and the bony parts (wing tips, tails, breastbones, etc) in another.
Cut the chicken fat and skin into small pieces. I usually try to cut them into 2 inch chunks, but if I'm doing really large quantities, I usually cut the pieces a little larger.

4. Cook.
Put all the chicken fat and skin in a wide pot or pan. Depending on the amount, I usually use a deep frying pan, but when I have a really massive amount, a large soup pot will do the trick.
If you rinsed your chicken scraps, there probably will be some water remaining on them, so you needn't add more, but if you're using unwashed chicken scraps or are not sure that enough water remains, add about a half a cup of water to the pot.


Heat the chicken parts on a medium high heat, occasionally mixing it. You'll gradually see more and more melted fat at the bottom of the pot.
At some point, your pot will be covered with a bunch of golden "oil" with some skin floating in it. If it still looks like skin, it is not fully rendered- you want the skin to look fried.
If you still see little bubbles rising from the bottom of your pot, keep the fire going for a bit longer. This means that there is still some water present; any water present when trying to use the rendered fat will cause dangerous splattering of hot oil, making burns likely. (Trust me on this one. I speak from experience.)
When the bubbles have ceased to rise, the fat is a golden liquid, and the skin is crispy, your chicken fat is ready.
5. Straining.
Put a colander inside a big bowl or pot. Line with a cheesecloth (or a cloth napkin designated for this purpose, as I do). Pour the rendered fat into the cheesecloth, letting the fat drip into the container and the solids remaining in the cloth.
Store the fat in the fridge or freezer and use as necessary. Note that it will harden when chilled but liquefy when heated.

The solids left in the cheese cloth are cracklings and are absolutely delicious eaten as is, or as a replacement for bacon bits as a crunchy topping on various foodstuffs like salads, mashed potatoes, etc.

In step 3, I had you put aside the bony parts of the chicken scraps. This method of rendering fat is more suitable when you have bony scraps, or when you would like to make a chicken broth as well. The downside is that you don't end up with cracklings and it is a bit more time consuming.

1. Fill a pot with your chicken scraps obtained in step 1 above. Cover with a decent amount of water.

2. Bring the pot to a boil. Simmer for at least an hour or two on a medium or low heat. 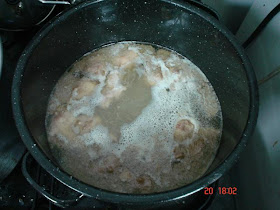 3. Strain the soup through a cheesecloth.

4. Put the broth in the freezer until solid.

5. Your fat will float to the top and freeze in a white layer on top of a golden soup.

Though hard, the frozen fat will be a lot softer than your frozen soup. With a spoon carefully scrape off the fat layer from the soup and move into another container.

6. Store the fat in the fridge or freezer and use as desired.
Defrost the broth before using and cook with vegetables and season before eating.

Do you ever cook with animal fat? Which type? How do you obtain it and how much do you pay for it?


Linking up to Fight Back Friday and Pennywise Platter Thursday and Real Food Wednesday.