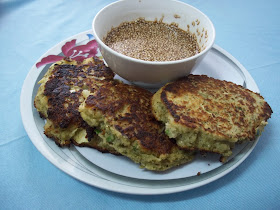 I think its interesting that when we think about foods of a certain, we have such stereotypes in our mind about what people eat, to the extent that when a food doesn't fit into what we knew certain cultures eat, there's some cognitive dissonance. I mean, I'll be honest- until I was an adult, I thought all Asian people (other than Indians) ate sushi, fried rice, lo mein, stir fried vegetables with meat, wonton soup, and egg rolls. And that's about it. I had no clue about the many varieties of Asian food, that Vietnamese cuisine is different than Japanese cuisine, that the different areas in China had different cuisines, and that Korean food was an entirely different ballgame.
Well, in the past year or two, I've learned more and more about various Korean foods, and I have to say, I've never tasted a Korean dish that I didn't like. Its probably my favorite of Asian cuisines, now that I've discovered that Korean food is not sushi and egg rolls.
These Korean pancakes are chock full of protein, are gluten free, vegan, and pretty tasty. They're filling, nutritious, and in my opinion, a whole meal in one. They went over well with my kids and with my neighbor's relatively picky kid.
I based this recipe off of the recipe for Nokdu Bindaetteok from Gluten Free Gobsmacked.
These remind me of okonomiyaki, Japanese cabbage pancakes, only these are based on mung bean instead of eggs, which is perfect for anyone vegan or off eggs for health reasons. They don't contain any weird, exotic ingredients, and they can easily be made with regular wheat flour if gluten isn't an issue.

The original recipe calls for split mung beans. I don't use them; I use regular mung beans, the type used to make bean sprouts, for this recipe.

Instructions:
1. Soak mung beans in a few cups of water overnight. They should absorb water and swell up. In the morning, pour off the water. 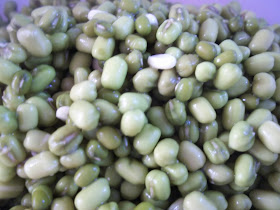 2. Unfortunately, there are a few mung beans in a batch that for some reason won't absorb water, and won't swell up, and therefore will not be able to be used for this recipe. Below the large beans are the ones that absorbed water, the smaller ones at the top are still hard and unusable. 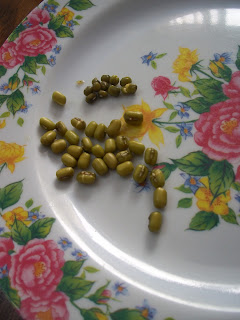 3. Go through the beans, removing all the small hard ones. I found the easiest way to do this was by dropping the beans, a handful at a time, onto a plate, from my fist. As each hard one would hit the plate, they would make a plinking noise, so I'd find them and remove them.
From the batch, I ended up with 2.5 cups of soft beans, and a quarter cup of hard beans, which I removed. 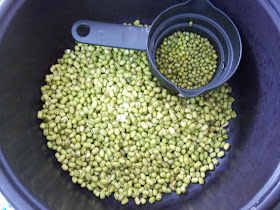 4. Put the beans in a food processor with a bit of the water and process until smooth. 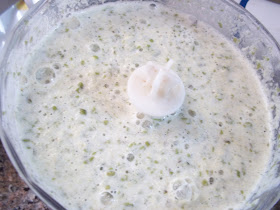 5. Chop the and onion thinly; chop the scallions into small pieces.

6. Add all the ingredients together. 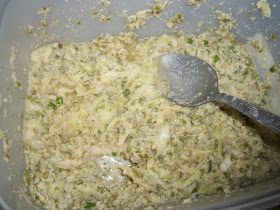 7. Heat up a bit of oil in a pan, then fry these as patties on a medium/low heat until the bottom is browned, flip over, and then cook the other side until browned. 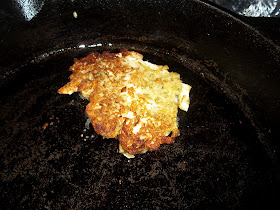 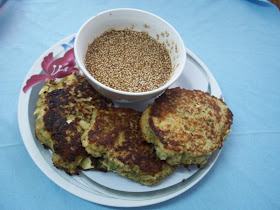 Have you ever had mung bean pancakes before? Ever cooked with mung beans or sprouted them?
Does this look like a recipe you'd try out?