I know everyone is in Thanksgiving mode over there in America-land, and if I were there I probably would be as well... but being married to a non American living out of the US, tomorrow is a regular day here, so, my head isn't so much in the Thanksgiving mindset, so you'll have to forgive me for the lack of Turkey day themed posts...

However, in sharing this post with you, I realized that this actually is sort of Thanksgiving themed, because I am super grateful about all these wonderful deals I got, and my ability to buy groceries at low cost, especially groceries that are healthy. 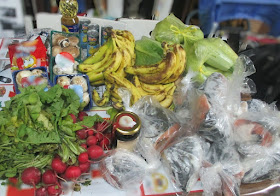 So, as I said in my last post, I am sort of doing a pantry challenge. Meaning, I am trying to put a focus on finishing up as much of the stuff in my stockpile as possible, especially the things I haven't been getting around to making lately so they just end up sitting there. There are a few exceptions I am making to my pantry challenge, among them produce, minimal animal products, and some basic staples that I need to be able to use up the things in my pantry (such as tomato paste, spices that I run out of, etc). However, even if I do need to buy these things, I wanted to get them as cheaply as possible, so for the first time in a long while I went to the open air market to see what deals I could get.


However, I only managed to get to the market later on in the evening, when most of the stores I regularly shop at already had closed, so I was worried I wouldn't be able to get my dirt cheap deals and steals that I usually get there.
However, one super cheap store was still open, and from him I bought a ton of zucchini, a ton of bananas, and a few bunches of radishes with the greens still attached, for a total of $17.14.

I found a stall selling sweet potatoes for  45 cents a pound, and I got about 5 lbs, but somehow they weren't with me when I got home, so I suspect I left them at the stall, so that stank, but at least it was only about $2.25 lost...

I saw a two pack of mushrooms for $2.85, which was a decent price for mushrooms, so I got them (especially since they're lower carb and therefore weight loss friendly), and then I saw them selling mushrooms that were on their last legs, 3 packages for $1.42, so 47 cents a package so I bought 3 more.

So altogether (not counting the sweet potatoes I lost) that was a $22.86 on a large amount of produce.

Then, seeing that I needed some cheap Paleo proteins, and not wanting to go to more stores than necessary, I decided that instead of going to buy gizzards and necks from a different cheap store, I'd buy some salmon heads, since I hadn't bought some in a while.
When I got to the fish stall where I like to buy mine, I asked them their price for salmon heads. They said $1.42 each, so I told them that sometimes they gave them to me 3 for $2.85, and if that was possible. They asked how many I wanted, so I told them that if they give me them 3 for $2.85, I'd buy 12. They agreed, and so I bought 12 massive salmon heads for $11.42, which worked out to be around $0.57 per pound of salmon head. Given that salmon (with bones) locally generally costs about $6.50 per pound, I think I got a pretty awesome price.

Of course it doesn't hurt that salmon is a very healthy fish, full of lots of nourishing and healing omega 3 fatty acids and salmon heads, as one of the more fatty parts of the fish, probably is the best source of omega 3 in the fish. So you get dirt cheap and super healthy in one go!

(And hey- once you debone your salmon heads, go ahead and make the bones and skin into a terrific fish bone broth which you can then use in a bunch of different tasty recipes.)

Anyhow, back to my shop!

I stopped at the scratch and dent store- and the problem there is you can't come in with a shopping list, because you never know what you'll find there... This time I found a bunch of stuff but the deals I bought were 4 cans of pure pineapple juice for $1.71, or 43 cents a can, a package of gluten free pretzels for $1.42- usually they cost $3.43 per package and upward (and occasionally I buy a package for my kids as a treat, so this will be put aside for those such occasions), and a bottle of sunflower oil for $2.57, and that was actually something that was on my shopping list, since I use it to make homemade vegan mayonnaise (the other oils I feel are either less healthy, harden in the fridge, don't taste good in mayo, or are an absolute fortune so I don't waste it on mayo), and I'm glad finding it at the scratch and dent store meant I didn't need to go on another shopping trip to buy it (and inevitably end up spending more money).

Then I went to a store looking to buy jaggery- I'm nearly out of coconut sugar and can't buy more in bulk at the moment, so wanted to have jaggery to use as a healthier alternate sweetener, but the store was out (they know me there as the jaggery lady since I usually buy 4-6 packages at a time, so as soon as I walked in, they tell me "sorry, all out of your sugar"- I'm famous for that), but while I was in there I bought some tapioca pearls, which I want to use to make a paleo risotto type dish. That cost $2.86 for the package, and I also was tempted and bought some special dried mushrooms for $3.57... I probably could have done without those last two purchases, but....

Anyhow, last but not least, I found a new store that sells date syrup cheaper than anywhere else I've seen it- $6 for a 900 gram jar, which, while not as cheap as jaggery, is still one of the cheaper sweeteners around, especially at that price. So I bought one jar.

Grand total for my shop?

I am very thankful for my ability to get food this cheaply!

Oh, and last but not least- I have to update on what happened once I got home.

Since the radishes I got were perfect, but their greens were on their way out, I washed off the greens and took out the icky parts, then blanched and sauted the rest, to extend their life, and I've been enjoying them in a variety of ways.
I also sliced and cooked the mushrooms I got super cheaply, also to extend their life.

Together with my deboned salmon heads and some cucumbers I also rescued before they spoiled (by making them into Korean cucumber salad and stir fried cucumbers, thus extending their shelf life), I've been making some absolutely delicious and dirt cheap paleo dishes to eat- today was salmon head hot and sour soup, and yesterday grain free bibimbap. Exactly what I like most- healthy, super cheap, and super tasty, wrapped up all in one.

Have you been able to shop extremely frugally lately? Any great deals you are especially grateful for?
Do you, like myself, try to buy the cheapest animal proteins or vegan proteins? What do you feel is the most worthwhile protein financially for you to buy?
Penniless Parenting at 12:41 AM
Share