This morning, I was looking at my fridge, trying to figure out what I could make for myself with what was available. I saw mountains of carrots, one lone zucchini, some past prime cucumbers, and some wild greens, and that was about it when it came to available produce to use in my house. Last week when I went to the market, I couldn't find much by way of produce that I can eat without bothering my stomach that could also be cooked, and wasn't super high in carbs, and today, as I pondered my fridge and what to eat, I realized I needed to shop...
Yes, I can fill up on fruit and carrots and sweet potatoes and such, but I have reached a plateau in my weight loss, and I would like to try to lose another 5-15 lbs tops, after having been staying the same for 9 months or so... And to do that, I know I need to have the bulk of my diet be produce, lower carb produce, along with some proteins at each meal, and that's it...

But then I have two other competing thoughts going on at once in my head. Yes, I want to lose more weight, but I also want to keep down our grocery bills to save for our trip this summer (which will be at the end of July in the end, to a different place that I hadn't originally considered, that will work out even cheaper and is more local, but not too local, which means even less time to save up for it) so Mike feels more comfortable with it, and spending money on out of season veggies or expensive brussel sprouts and broccoli and asparagus is not exactly the best way to reduce grocery bills... On top of that, I need to think about my sanity too. I am trying to juggle a lot of things at once, and fortunately using my meal plan is allowing me to keep my sanity while cooking frugally for the rest of the family, but my paleo food can be more time consuming to make, and I don't always have the energy to spend time preparing the more time consuming cheaper produce (nopales, I'm looking at you)...

And so, when I went to the grocery store today, I tried to strike a balance between frugal shopping, my sanity, and my health and weight loss goals...

I think I did decently well.

This is what I bought: 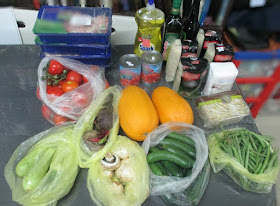 Here's what I got, and why:

4 kilos, or 8.8 lbs of short grain rice. Not for personal use. I'm grinding it to fill some gluten free bread mix orders I got. The total for that was $8.80, which really should be deducted from my whole grocery bill amount, as that is a business expense, not my grocery bill.
As should the $1 package of sugar, 2.2 lbs, also for bread mixes.
So really, the total for my shop was a round $50.

Olive oil locally is often $8 per 750 ml bottle when its a decent price, and on sale I can sometimes get it for $7.14 a bottle. So when I saw it for $6.82 I decided to grab a bottle.
I also grabbed a bottle of gluten free soy sauce for $5.77 for a 623 ml/21 oz bottle. The gluten free soy sauce I usually buy is $4.22 for a 450 ml/15.2 oz bottle. The one I just bought therefore works out to be 27.5 cents per ounce, versus my usual at 27.8 cents an ounce. I'll be honest, I didn't even do the math in the store- only did it was I've been writing this post, and now I see it does work out to be cheaper, but negligibly so. However, this new brand of soy sauce doesn't have food coloring in it, whereas the stuff I generally bought did (the coloring free brand was at least 1.5 times the price if not twice), so I'm glad I discovered a new brand that is healthier and not more expensive...

I've been buying chicken "bones" for 90 cents a pound, since its the cheapest per pound I can find chicken, and there is more meat on it than you'd expect, however... I recently realized that I end up eating between half and three quarters of a 2.5 lb package in one meal, and if I'm really hungry an entire package, as there is a lot of bone there... so either psychologically it doesn't feel like a lot of meat or it actually isn't, but either way, despite the low price, for me, I end up paying between $1.50 and $2 for the meat for one meal for me alone when it comes to those bones... so when I saw chicken wings on sale today for $1.03 per pound instead of their usual $1.30 per pound, I knew it would be a good deal. You see, I know that one 2.2 lb package is enough for a meal for my entire family, and if only I was eating it, it's enough for 4 meals for me. That means that for the family it works out to be $2.26 for a meal for 6 people, or if just I was eating them, 57 cents for the meat for my meal. I'm realizing that even at their regular price of $1.30 a pound, it still works out cheaper per meal than the bones, as its 2.85 for a meal for the whole family, or 71 cents a meal for me. They only had 4 packages at this lower price, though, so that's all I got. $9.57 total for the chicken wings.

And last but not least, I bought my daughter, who was shopping with me, a yogurt for 34 cents.

I brought cans and bottles (most that my kids picked up while foraging) to redeem for cash, and therefore got $3.43 off my groceries.

Could I have gotten my groceries cheaper today?
Yes. I could have gone to the market instead of shopping at the nearest supermarket chain. However, sanity... I was taking Rose with me, and wanted to be back early enough to put her to bed on time (Mike was too tired to watch her while I went out; he's been working late, so I couldn't leave her home with him) which meant more money on groceries by shopping at a more expensive place.
And I could have just gotten tomatoes and cucumbers and not any of the more expensive produce... but honestly? They get old very quickly and I do need variety in my diet... which is why I went shopping in the first place today, since I needed varied produce and only tomatoes and cucumbers doesn't cut it.

But either way, I've been calculating the grand total spent on groceries so far this month and it is still low, very low, so that's great.

What have you been buying lately? Any great deals? Any things you used to think were very frugal, but in retrospect, you see weren't the most frugal choice, and in fact, another choice that seemed more expensive actually was more frugal?
Would you spend more money on produce so you'd have variety, or would you choose cheaper even if less variety?
Penniless Parenting at 11:23 PM
Share