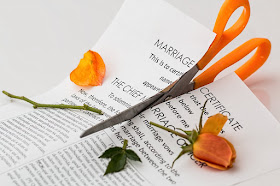 After I let people know that I was getting divorced, I have to say that I really appreciated how many people just reached out to me and told me that they were there for me. I appreciated (most of ) the comments that people left on my last post, telling me they believed in me, were praying for me, etc...

But I also realized something. Some people don't react the same way. Some people act in ways that I would rather they not act. (Like the person who left a comment saying that I obviously don't respect the sanctity of marriage, and I'm making the biggest mistake of my life, and the only reason I'm getting divorced is because my therapist puffed up my ego too much, and the only valid reason for divorce is if you're beaten senseless.)

Because of how some people reacted when they found out I was getting divorced, I wrote this PSA and I wanted to share it here as well.

When someone tells you they're getting divorced:


-Remember it's about them, not about you. Even if it shocks you or upsets you, remember this is someone else's life and they don't need to make these decisions about their life in a way that makes you feel good. They also don't owe you an apology for "letting them down". It is about them, not you.

-Some people may decide to trash talk their exes or soon to be exes. Some people choose to take the higher ground and keep these things private. If someone isn't sharing why they're getting divorced, they don't owe you any explanation as to why, nor scrutiny as to whether or not it is the right decision. Just because things 'looked ok' to you doesn't make it so. Remember you're only seeing a very tiny fraction of the picture and no one owes you the rest of the picture so you can understand.

-Even if someone does tell you the reason for divorce and you think it isn't good enough, don't judge them. Even the reasons they're giving are a fraction of the whole story.

-No one makes the decision to divorce lightly. Everyone has heard of the concept of going to marriage counseling. Everyone has thought about 'giving it another chance'. Telling someone 'have you considered marriage counseling' or 'can you try to work a little harder' is very patronizing and in my opinion never has a place. Unless you're the person's therapist, you don't know the whole picture (and even then maybe not) so making these 'suggestions' doesn't help anyone's marriage

-Know that abuse isn't the only justifiable reason for divorce. There are many reasons why divorce is the best option, even when you believe in the sanctity of marriage, even when there's no abuse. Don't assume that just because people are divorcing that they hate each other.

-Making comments that you "feel sorry for the kids" is hurtful and implies that the person divorcing isn't making the decision keeping in mind what is best for the kids. Again, you don't know what is going on, so you don't know whether or not the divorce will help the kids or not. Divorce is a hard enough decision to come to without people trying to guilt trip you because they think you're "harming your kids".

So what can you do?

Ask people if there's any way you can help. You can offer a general help but types of help that people might be uncomfortable asking for but probably would appreciate is helping watch the kids, invites for holidays, etc...

Don't ask why they're getting divorced or ask for details but do offer that if they want to talk, you're available.

If they're now suddenly needing to be the main breadwinner, ask them if they need help finding work, and if they want help, help with that, either offering them jobs or sending jobs their way.

If you've been through divorce and found specific resources to be extra helpful, offer them. I really appreciate the friends who gave me children's books about divorce. I've been reading them to my girls and my boys have been reading The Divorce Helpbook for Kids.

Tell them you believe in them.

Other than that? Pray for them, be there for them if they want, and just wish them the best.
Penniless Parenting at 8:09 AM
Share