What We're Feeding Our Dog, and Are Dogs Expensive? 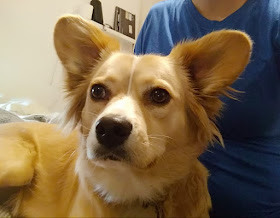 We brought our dog, Snickers, home in July and we are very much in love with her, and she is a wonderful addition to our family. All the family members adore her, and she adores us, and patiently puts up with some kids who are extra expressive in their love of her, if you catch my drift.

One of the things people warned us about when we decided to get a dog is that dogs are quite expensive to have, from their initial cost to food to their toys and accessories to the destruction they cause to their medical care to their training. Fortunately we lucked out with the dog we got, in that we didn't have to pay anything for her other than traveling to and from where we got her from, and she came already spayed and vaccinated and trained (mostly), and is young enough that she isn't having health issues, but old enough that she doesn't destroy things (at least not too many).


We did go to the pet store and buy a few things for her at first, including a leash and a muzzle (to allow her on buses) which cost about 20 dollars.

When we first brought Snickers home she was perfectly behaved, but she's shown to have some separation anxiety, and a few times she chewed up things. Fortunately the things she's destroyed haven't been too problematic, such as my kids' outgrown shoes, so her destruction didn't cost us money. However, I turned to a dog training forum and asked about why she would be doing that, and they said that she is a smart dog (part border collie and part lab, both smart breeds) and needs mental stimulation, and if she doesn't get that, she'll start making trouble, such as destroying things. They recommended getting her some Kong toys as they provide mental stimulation, as well as things she's allowed to chew, so I bought her two different Kong toys, this fillable chew toy and this wobbler as well as some large animal bones. At that trip to the pet store, I spent about 40 dollars. And they helped so much. She hasn't been destructive. She's getting her brain stimulated, and she's a pleasure to be with.

And since then, that's all we spent on our dog. 60 dollars.

Well, what about food, you might ask? We're feeding her predominantly what is called the BARF diet, standing for Bones and Raw Food or Biologically Appropriate Raw Food. We're not doing that 100% but we're definitely not giving bought dog food.

The same way I don't think processed food is good and the best diet for humans, I don't think it's the best diet for canines. Most dog food is very high in grains and when they are grain free they still often end up being high in carbohydrates. There's no conclusive evidence as far as I know, but there's been conjecture that the rise in diseases in dogs such as diabetes and celiac are connected to eating a diet that is higher in grain than the diet which their gut is designed to digest.

Dogs have different nutritional needs from humans. For example, dogs have a really high need for protein, fat, and calcium, and don't really need carbohydrates, certainly not a lot.

From what I read, dogs' diets should be predominantly protein and fat based, with a lot of calcium, and very varied so they can get enough vitamins. For this reason, proponents of the BARF diet recommend diets based on animal proteins and with a lot of bones and organ meats.

Wait, bones?? I hear those seasoned dog owners saying that bones are dangerous for dogs. This is a misconception. The issue is that cooked bones can shatter in a way that can cut up dogs on the inside. This isn't an issue with raw bones. And for cooked bones, they can be pressure cooked or cooked in a crock pot long enough to make them soft and crumbly to eliminate this issue.

So, with all that preamble, what are we feeding Snickers?

The thing I buy most often for her are chicken scraps from the grocery store. These are sold at 75 cents a pound frozen, and consist of meat, bone, cartilage, and fat. They're sold for making soup, and are the biggest base of her diet. I can often get these free from the open air market, when I manage to make it there, but if I can't make it there, I just buy it cheaply frozen.

These are the biggest base of her diet. Fish heads contain brains and also the fish hearts, which, being organ meats, have a lot of extra concentrations of essential vitamins and minerals that the dog needs.

When I can buy them cheaply, I also buy liver for the dog. I've tried giving them to her raw, as a very rich source of nutrients, but she didn't care for the texture. I then tried cooking it, and again she wasn't a fan. However, by chopping it up frozen and giving her frozen chunks, she loves it that way.

When I don't have other food available to give her, I also give her whole eggs, raw. I just crack them into a bowl and she laps it up. I've tried them cooked but she doesn't seem to like it as much. And if I'm really in a pinch, I take a fillet of fish from the freezer and give them to her that way. If you want to feed your dog eggs, here is how to cook them.

We also collect meat scraps from our plates and give them to her. Meat bones, as written above, when cooked in a pressure cooker, get super soft and won't shatter when a dog eats them. Because we give her leftovers, I'm cognizant when cooking that she will be eating it too and I leave out ingredients that are dangerous for dogs (onions, garlic, grapes, etc...) so that we can give it to her afterwards.
When I'm cooking chicken and cutting up the raw meat, any hard bits get given to the dog on the spot.

I've tried giving her vegetables and fruit and she isn't the hugest fan of them, which is why I put some in her homemade doggie treats. We're working on getting her to eat them, and I've discovered that if they're covered in chicken or fish broth, she's more likely to eat veggies like green beans. She also likes to nibble on greens growing in our garden.
Once in a while, depending on what I have available, I'll give Snickers some rice with chicken broth.

By chance, we discovered that Snickers likes carob. We break it into little pieces and give them to her as as treat. And yes, we forage the carob.

So how much are we spending on Snickers' food?

I tried calculating it for a few months, by dividing my grocery bills into sections specifically for the dog, but the amounts were so insignificant, something like five or six dollars a month, sometimes less. Really insignificant. Since she's joined our family, our grocery bills have stayed exactly the same.

So yes, I do think that having a dog can be frugal. Yes, as they get older they get more expensive because they develop health issues. But there certainly are frugal ways to have a dog.

If you're a pet owner, how much would you say you spend on pets per month, or over the course of the year, on average? What type of diet do you give to your pets?
Penniless Parenting at 10:36 PM
Share