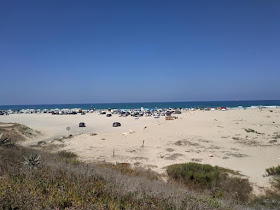 A few hours ago, we got home from our family's longest camping trip ever, five days and four nights camping on the beach. To get there entailed taking one bus, then three trains, then another bus, plus a bit of walking... but it was well worth it. The kids and I had a wonderful time, despite my initial trepidation of doing this as a single mom for the first time.

As a single mom with a very small income, I still want to be able to give my kids wonderful experiences and fun vacations, but I can't do that if it entails spending lots of money. So I travel within my country, places that I can reach via public transportation, and ideally with free accommodations and if not, frugal ones.


To figure out how much this trip costs there are different ways to calculate it. I can add up the cost of the sleeping bags and tents and yoga mats that I bought throughout the year, but those were not one time use items, they were budgeted monthly, and therefore I don't find it necessary to include as part of the costs for the trip. Transportation was the largest official expense, $74 for everything there and back via public transportation. And then there was the cost of food, which honestly, was part of our monthly grocery budget, and I am not going to go over it. However, knowing about this trip in advance, I spent less on groceries earlier in the month to give me more leeway in my grocery budget, because I knew that the grocery store near our camp site was ridiculously overpriced, and I wouldn't be skimping on grocery shopping while there, but instead buying whatever we wanted and would work best. I spent $284 on food and equipment (like charcoal and disposables, etc...) for the five days, but we also ended up taking some stuff home with us. If you count the food, therefore, the entire trip cost us $358, but really, in my opinion, the true cost of this trip was just the $74 transportation there and back. Because, of course, everything else on this trip cost us absolutely nothing. No price for the camp ground, no price for activities, etc...

I'd say that that's a mighty frugal five day vacation for five, if you ask me. 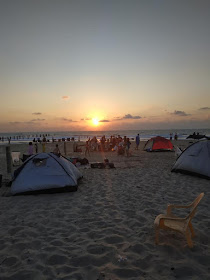 For supper, on day three (since I left off with day three in the afternoon), we grilled hot dogs and chicken wings, as well as a whole eggplant, which I then covered in tahani paste, lemon juice, garlic powder, and salt, which of course no one but myself wanted, so I made the kids a tomato salad instead. Since I was using charcoal for grilling, and I suck at lighting charcoal (yes, even with plenty of lighter fluid, etc), I decided that once I had the fire going I'd barbecue the rest of the chicken and hot dogs, to have the next day as well. Kids had buns with their hot dogs.

Day four in the morning, we all had cereal and milk or soy milk for breakfast, and then went to swim.

We ended up playing in the sand a lot. 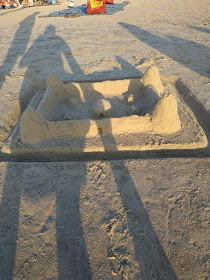 Lee and Ike built this sand castle, which they were very proud of, because they managed to make it with no equipment, just their fingers.

Rose had been asking to go for a "hike" with me along the beach, since last year on our camping trip, we walked back to the nearest city along the beach, and Rose remembers finding dead jelly fish there and wanted to go see more dead jellyfish. So on day four the kids and I went for a walk along the beach. 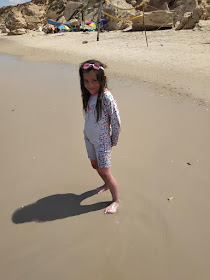 At some point, I was just too tired and wanted to turn back, but first decided to take a break in the shade of the cliffs overlooking the beach. While we were sitting there, we started playing in the sand, and decided to make a mermaid sculpture together out of sand and shells. 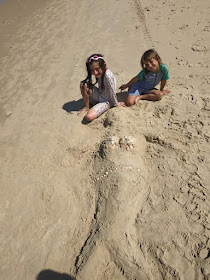 The kids and I were so excited by our mermaid, but then realized that we had no camera to take a picture... so we walked back to the camp ground, picked up my phone, walked back, and fortunately it was still whole, other than the arm that got run over by a vehicle... We then fixed it, and photographed it. 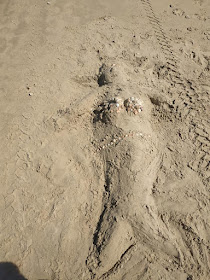 Unfortunately, whoever hadn't gotten a sunburn by then did, including myself, Rose, and Anneliese, despite lots of sunscreen. I guess by day four in the sun, doesn't matter how much sunscreen you use, something will get burned. Oh well. 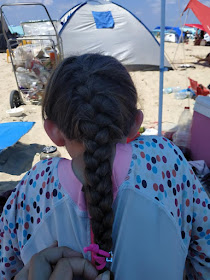 Once we walked back to camp, we decided to lounge around in the shade, and I played with Anneliese's hair, brushing it out (which to be honest I hadn't been strict about since we've been in and out of the water constantly), and attempting to make a french braid, which I have to say isn't a bad attempt...

Lunch was leftover hot dogs and chicken, plus peppers and gluten free buns, plus kabanos sausages. I also made some ice "coffee" using the leftover soy milk from breakfast and chicory coffee substitute. We also had apples with peanut butter.

After that, because of sunburns on Anneliese's legs, I recommended to her that she keep her legs covered. So we were sitting on the sand and I said why don't we bury you in the sand. Then Lee had the idea that we try to repeat the earlier mermaid sculpture we made, this time with Anneliese in it. She loved the idea and had a blast. 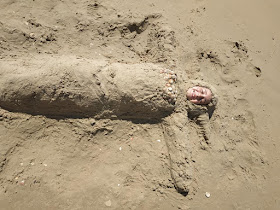 The other kids all really enjoyed themselves as well. 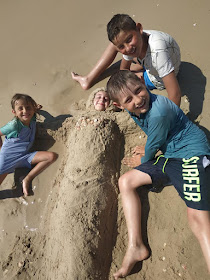 Oh, and here's the whole thing from the side. 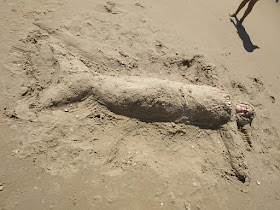 After that, Anneliese had fun trying to get out of it. 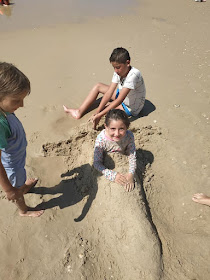 Supper was a large salad made with tomatoes, peppers, cucumbers, corn, and salami chunks. We foraged for some wood, since I failed miserably with the charcoal, and made a nice bonfire for the last night, and then everyone went to bed.

In the morning my kids saw the food and asked how on earth I would take the food back together with all the camping equipment, but after breakfast of cereal and milk and soy milk, plus ice "coffee", I tossed out the garbage, organized everything, and managed to get all the food, extra disposables, and all the equipment back into the wagon and backpacks.

In the middle of it all Rose asked me to please make her two french braids... 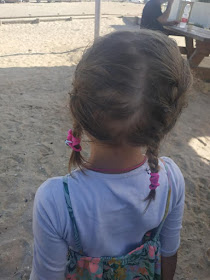 The kids all went swimming one last time... 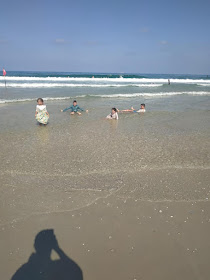 Other than Rose who didn't want to wear a bathing suit... 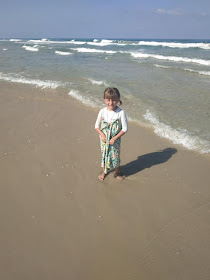 So she hung out with me on the shore, in the shade, talking to some people who were also relaxing there...

And then we showered, got back into our clothes, packed up the swimsuits, and were off for the long journey home! 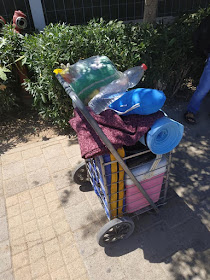 I took this photo on the way home, when walking from the bus to the train station, showing how I packed the wagon. The bag on top was a shopping bag filled with our food for lunch.

On the train home we ate bread and rice cakes with peanut butter, apples, and sausage.

The trip was wonderful, everything I hoped for and more.

Things I'd do differently for next time would be getting a larger sun shade, because the girls and I ended up sleeping there instead of in the tent, since it was much more comfortable, bring a better grill, not bring the gas burner, bring more baby powder, and not bring snorkeling gear since it was too wavy to be able to use it anyhow. Beyond that? Everything was wonderful and we wouldn't change a thing.

The kids and I agreed that this was our best family vacation ever, and we look forward to doing it again next year!

I have some more thoughts on this trip, but those will be saved for another post.

How often do you go on vacation with your family? How much do you generally spend on said vacations? What's the cheapest you've gone on vacation with the family? Do you consider groceries bought on vacation as a vacation expense or just part of your regular food budget?
Penniless Parenting at 10:59 PM
Share