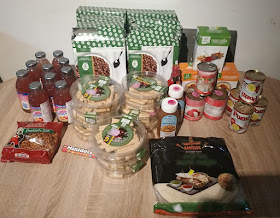 It had been a while since I shopped at a scratch and dent store. It didn't help that my nice, big and study, metal wagon broke and I only had little fabric weak shopping carts to use, and I still haven't been able to find a suitable replacement. Add to that that I've been busy and I haven't even made it to the city to do some frugal shops, only to the nearby (albeit frugal) grocery stores.

So it was time to go back.


Fortunately I had a reason to be passing by one of them, and I popped in, and saw that it was well worth a visit. After completing my errand I came back and this is what I bought.

The best deal I saw was actually for these gluten free cookies. In stores they sell for $5.75 a package, and I'd usually find them being sold at this store for $1.43 each, sometimes for 95 cents, but now they were being sold for 71 cents if you bought them in multiples of 4. I bought 12.

There was TVP flakes and chunks being sold for 95 cents a package. I want to experiment a bit with them to use in some meat free meals, like when cooking for my vegan friends, and it was a cheap enough price with which to experiment. I bought 3.
Then the rest of the things were all heavy, so I just bought as many heavy things as I could fit in my backpack.

There was a package of 12 wheat tortillas which was being sold for $4.29 which, to be honest, I'm not quite sure if it was a good price, but it was good convenience food, and next time I'm in the grocery store I'll check to see how that price compares, but either way, so far my kids have enjoyed burritos and quesadillas with it.

And that was it from my first shop.

Then the other night I was passing another scratch and dent store. I had been asked to bring 8 individually wrapped treats for Rose's class the next day, and I popped in to see what I could get. I found these chocolate lentils in these cute tubes being sold for 29 cents each, so I bought enough for the class.

They had pretzels being sold for 95 cents a package so I bought 3.

And they had Snapple. Which I love. Being sold for 71 cents a bottle when they are usually 4 or 5 times that price. So I bought 16 bottles.

I don't have the exact total of these because I lost the receipts, but hey, at least I know how much I paid for each thing!

I think I got pretty good pricing!

Oh, and if anyone noticed that the photograph doesn't seem to show as many items as what I described I bought, well, I shopped a few days ago, but it took until now to get around to actually staging the items for the pic, so quite a bit has been eaten since then. Oh well.

Have you gotten any great deals lately, especially from scratch and dent shops or reduced racks in regular grocery stores?
Penniless Parenting at 12:43 AM
Share