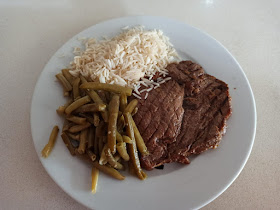 I want to apologize for the slow posting rate; after exposure to someone with the coronavirus my family is in quarantine, and I have to say that it is extremely extremely hard for me to be focused and get work done while I'm in quarantine. One day simply bleeds into the next, every day feels the same, I'm silumtaneously bored out of my mind yet can't work up the energy to do anything. Add to that that I have a cold or something (waiting for a corona test) and that means that my productivity consists of making and drinking pot after pot of chicken vegetable soup, and not much else. Writing posts has been hard for me to do- this same post has been written sentence by sentence, word by word, over half a week already. Sorry for that. I will try to pick up the pace- I have hundreds of posts in the lineup to write, now I just need to get them done.

And with that prelude, I want to share this really amazing steak recipe. Of course, some people are of the opinion that a good steak doesn't need any seasoning at all- just plain meat and salt is enough. And while that is somewhat true- just because something doesn't need seasoning to make it good doesn't mean that such additions don't make it even better. And lets face it, I'm a frugal girl, I don't often buy "good steaks"- when I do buy steak its usually the cheapo stuff that is far from high quality, and you betcha it calls for something to make it better. I made this steak when making a special welcome back meal for someone special who moved back locally recently after a few years far away, and everyone, especially the 6 year old, devoured it, and wanted seconds and thirds and fourths. For them, I'll admit, I used the nice expensive steaks, but I make it more often with the cheaper steaks and it tastes just as wonderful, if a bit more chewy.

This steak idea hails from Korea and is based on the dish known as bulgogi, which is a marinated grilled type of beef or pork. It, in my opinion, makes the most divine type of steak. While most versions of bulgogi are sweet, this one is low carb and sugar free. Also, bulgogi means in Korean "fire meat" because this meat was traditionally cooked over an open fire, but now people make it pan fried. I use my grill pan because then it leaves nice grill marks and I can pretend its over the fire while not neeting to fire up a grill. Another thing that differentiates mine from standard Korean bulgogi is that mine is cooked in individual steaks, while most bulgogi's steaks are cut into thin strips. Though mine is untraditional, I assume it can still be called bulgogi, and I highly recommend it.

Do you enjoy steak? What is your favorite way to prepare it? Have you ever heard of, had, or prepared bulgogi before? How was it, compared to this recipe? Does this look like a recipe you'd try?
Penniless Parenting at 1:13 AM
Share