Frugal Ways to Find Unique Games for Your Kids

"Mommy, I'm bored!" is probably a constant refrain in most homes that have kids. Especially if you try to limit the amount of screen time your children have, it's hard to come up with ideas of ways for the children to be entertained, and games can get pricey. Here's some good ideas sent to me by a reader on how to entertain your children with a low price tag. 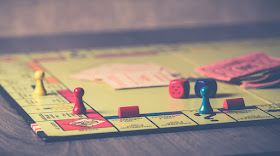 Play is an important part of growing up, and games give families a unique chance to bond. Unfortunately, however, games can get expensive quick, especially when kids are always looking to refresh their options.

In 2016, the average American household spent $2,913 on entertainment. This total looks small compared to the amount of income spent on bigger items like housing and transportation, but it's a significant amount of money nonetheless.

Even if some families don't spend as much as the national average, it's possible that many still spend more than they would like on entertainment. At the very least, they could probably be getting better deals.

Most households can't afford to spend oodles of money on games and entertainment. But that doesn't mean they can't still have fun. Here are a few simple ways parents can find great games for their kids without emptying their wallets.

Local libraries aren't just for reading anymore. In fact, many libraries offer other forms of entertainment including movies, activities, and yes — board games. The best part is they're totally free.

Many libraries are beginning to circulate board games, so next time parents need something new for family game night, they would be wise to check out the library's collection. Policies vary, but checking out board games is usually pretty simple, although the librarians may check to make sure all the pieces are accounted for when parents turn the games back in.

Check with the local library to see if they offer games for checkout. In the case that they don't, also ask whether or not they have any clubs or games available to play in the building. People are often surprised to learn how much libraries really offer their patrons.

Many entertainment publishers arrange special deals in order to bolster excitement and increase sales. Though deals aren't always a guaranteed way to save money, keeping an eye out for sales and giveaways can pay off.

Some publishers even offer exclusive bonus material for pre-orders and other purchases. For example, the publisher of the upcoming book Everyday Magic for Kids is offering an extra magic lesson along with pre-orders right now. Taking advantage of these deals is a great way for parents to get more bang for their buck where fun is concerned.

Having fun on the cheap isn't difficult — it only requires a little imagination, something kids are well-acquainted with. Parents can save money on games by making their own and by purchasing games with endless replay-ability.

For little kids, DIY versions of classic games provide hours of entertainment. Design a checkerboard using chocolate and vanilla cookies as pieces, make a car racetrack out of electrical tape or just throw around a soccer ball and start inventing rules as play goes along. These games require some creative thinking, but they're exciting for kids and cheaper than purchasing the latest fad toy.

For older kids and adults, find games that incorporate so much variation they rarely get boring. Geeky parents, for example, might invest in Dungeons & Dragons gear to keep kids engaged and entertained for countless adventures. The starting cost is low — a set of dice and some printout character sheets if the parents already know what they're doing — and tons of resources online make play accessible to pretty much anyone.

Card games like Cards Against Humanity and the more kid-friendly Apples to Apples are other good examples of games that provide consistent fun no matter how many times they're played.

After a while, even the best games may lose some of their spark. In order to avoid buying new games and leaving old ones to gather dust in the back of the closet, some parents may consider holding an entertainment swap.

An entertainment swap allows families to trade games for different ones. Ideally, all participating families get rid of games they don't want and walk away with something exciting and new. Though the games traded might be well-used, they're still worth checking out. One person's trash is another's treasure, after all — incidentally, this means parents may also benefit from checking out yard sales and thrift stores.

To arrange an entertainment swap, contact parents and other friends. A local school may even be willing to facilitate a swap if enough parents show interest.

Have Fun While Saving Money

Having fun and making wise purchasing decisions don't have to be mutually exclusive. In many cases, families can have just as much fun with old, invented or borrowed games as they can with brand new ones.

In the end, as long as families are playing together, they're bound to have fun.

Have you ever used the tips and tricks in this piece? What tips do you find work best for your family? What are ways you keep down the cost of your family's entertainment?