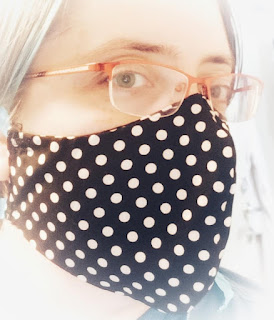 I've shared plenty of tutorials in the past for hand crafted items, but in 2019 would never have expected for a post from 2020 to be about making your own mask, but the world as we knew it changed this year, so it is what it is.

At first I was using disposable masks, until I bought my first set of store bought cloth masks. The shape that they were in was quite comfortable, and it stopped my breath from misting up my glasses, but what I got was just slightly too small for me and it was irritating on my ears. Additionally, the type of material that it was was quite hot, and since masks are required when leaving my home and it's quite hot here, I needed something that was more manageable in the summer.

Once I got home, I lay my mask onto the fabric, and traced the shape of the mask, adding an inch all around each side to make room for sewing, and also to increase its size a bit. I cut out one, then used it to trace another one, then flipped it over to make two more ones the reverse shape. 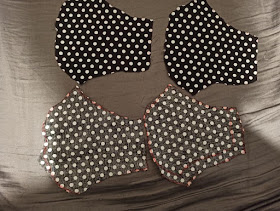 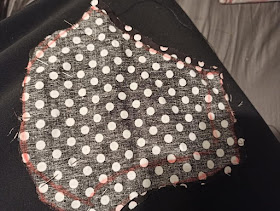 I then lay peice on top of the other, so that the nice side was sandwiched between the two, and then pinned the left curving edge. If you have a sewing machine, you'd run it down there. But since my sewing machine and I haven't been friends lately, I decided to do this by hand. 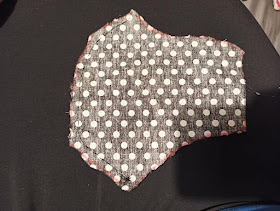 I just did a single regular stitch going the whole way around, and then went back and sewed between the holes that were already there, to make it a stronger stitch and not pull. Oh, and I kept the thread doubled for this.

I then did this with the second two pieces. 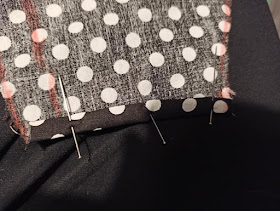 I then hemmed the straight end opposite the end I previously sewed. For various reasons, I decided to double fold these over before sewing it. 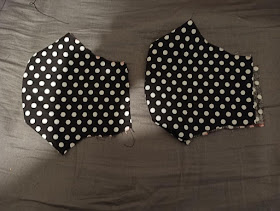 Then I flipped them both to be right side out to see how it looked. 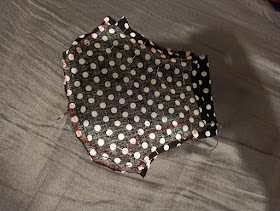 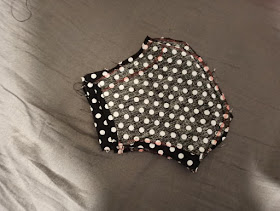 Open it up- sorry, this part wasn't photographed, since it doesn't lie flat at that point and I couldn't take a picture as well as hold it down- and pin it along the top and bottom, the entire length of the mask.

Then sew it along those edges that were pinned.

Now, the two ends are the only parts that aren't sewed shut, so pull the sides through it, and turn it right side out. 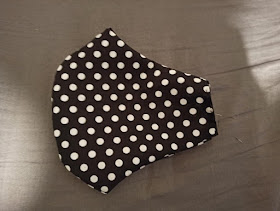 Now for the last step. I decided that because masks were hurting my ears, I'd make mine in a way that ties shut, and since I had some bias tape in my sewing box, I decided to use that. You can also use ribon or t-shirts cut into strips. I did a bunch of stitches back and forth over the same area to keep it strong, since this is the area that will have the most tension on it. I sewed both sides together over the bias tape, again to keep it stronger. 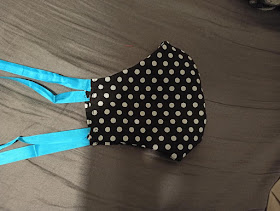 And here is a full frontal view. 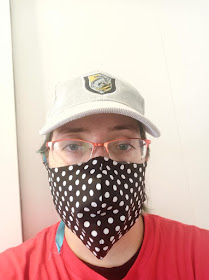 I wasn't 100% sure I liked the shape of the curve on mine, and thought I would adjust it for future ones, but then I realized I like that there is a little space in front of my mouth- it makes breathing easier.

After I finished mine, I then made masks for my girls from fabric scraps a friend gave me for them to practice sewing with. The girls picked out which fabric they wanted. 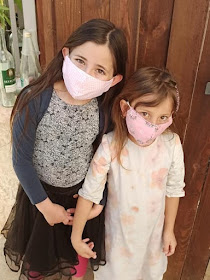 For the girls' I used elastic to go over their ear, so instead of sewing the bias tape on, I just sewed elastic in a loop.

I made theirs smaller than mine by tracing their previously purchased masks, but the shape was more or less the same as mine.

Anneleise wanted two different colors for hers- one for the inside and one for the outside- a cute fox pattern and a checkered pink and white one. 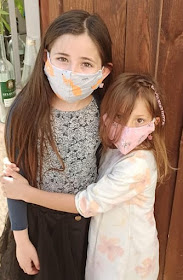 I love how the masks came out.

I love being able to make these things from scratch and not needing to hunt around to find stuff that I like.

What kind of masks are you wearing? Store bought? Homemade? Made from private sellers? Disposables? If you made yours from scratch what pattern did you use? Would you try out these instructions?